bird is the raven. As noted above, it the most prominent component of the royal crown. In Bhutan, the raven represents the deity Gonpo Jarodongchen, the raven-headed Mahakala, one of the country’s chief guardian deities.The Bhutanese credit the raven with having guided the founder of Bhutan, Shabdrung Ngawang Namgyal, to victory during the invasion from Ü-Tsang (Tibet) in the seventeenth century.

The national animal is the takin (Burdorcas taxicolor). This bovid is also associated with religious history and mythology.Today it is a rare animal, and its conservation status is “vulnerable”. It has a thick neck and short muscular legs.It lives on bamboo, traveling in groups at elevations around 4000m on the northwestern and far northeastern parts of Bhutan

ontained in a circle, is composed of a double diamond-thunderbolt (dorje) placed above a lotus,surmounted by a jewel and framed by two dragons. The thunderbolt represents the harmony between secular and religious power. The lotus symbolizes purity; the jewel expresses sovereign power; and the two dragons, male and female, stand for the name of the country which they proclaim with their great voice, the thunder.” It is also known for its symbolic colors of the emblem with the gold, teal, red etc.

The national flag of Bhutan is one of the national symbols of Bhutan. The flag is based upon the tradition of the Drukpa Lineage of Tibetan Buddhism and features Druk, the Thunder Dragon of Bhutanese mythology. The basic design of the flag by Mayum Choying Wangmo Dorji dates to 1947. A version was displayed in 1949 at the signing of the Indo-Bhutan Treaty. A second version was introduced in 1956 for the visit of Druk Gyalpo Jigme Dorji Wangchuk to eastern Bhutan; it was based upon photos of its 1949 predecessor and featured a white Druk in place of the green original.

The national flower of Bhutan is the Himalayan blue poppy (Meconopsis horridula). In Bhutan, it grows to a height of 1 meter on the rocky mountain terrain, above the tree line at altitudes of 3500m to 4500m. Bhutanese tradition links this flower with the yeti of lore 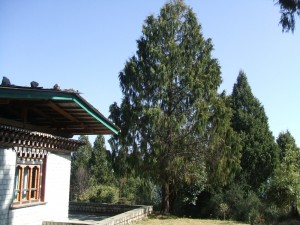 The Himalayan cypress (Cupressus torolusa) is the national tree of Bhutan. They are associated with religion, and may often be found near the religious structures and in the temperate zone between altitudes of 1800m and 3500m.To the Bhutanese, its ability to survive on rugged terrain represents bravery and simplicity. 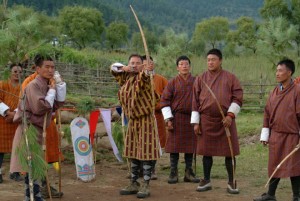 Archery has been the official national sport of Bhutan since the kingdom’s accession to the United Nations in 1971. Other particularly Bhutanese sports of note include digor, resembling shot put, and khuru, a kind of outdoor dart game.These sports have their own tournaments and place in celebrations ranging from local tsechu festivals to Bhutanese public holidays. These traditional sports, especially archery, are imbued with communal, religious, material, and commercial significance. Increasingly, traditional sports have adopted modern innovations, from compound bows to corporate sponsorship